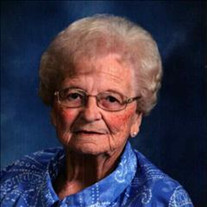 Helen Louise Obermier left her earthly home Wednesday, October 21, 2020 at Melissa Memorial Hospital in Holyoke, CO. Helen Louise Obermier was born May 7, 1930 at the Haxtun hospital to Ione Elizabeth Thurness and Emray Allen Price from Sedgwick, CO, the third of five children. Helen grew up in Sedgwick, CO. She graduated in 1948 from Sedgwick High School, Sedgwick, CO. Helen was a tom boy. She always wanted to work outside with her father. It was torture for her to help her mom inside the house. She loved their Shetland pony Ribbons, who was a favorite to everybody. She and her siblings rode horseback to Sunrise School for seven years. After that time they rode the school bus into Sedgwick. In high school Helen was active in Pep Club and school plays. She graduated from Sedgwick High School in 1948. Helen was baptized and confirmed in the Lutheran faith. After graduation she attended one year of college at CSCE, Colorado State College of Education. She met the love of her life, Russell Obermier, who ran the Mobile station in Sedgwick while she was in high school. Russ was not from the area, calling Waco, NE his home. They were married on September 4, 1949 at St. Paul's Lutheran Church in Julesburg, CO. To this union three children were born, Gary Allen, Janet Lynne and Kenneth Bruce. Early in her marriage Helen worked for Dolan's Grocery Store in Sedgwick. Helen and Russ moved to Julesburg where he ran a Mobile station. His service station was located behind Whitten's Cafe, in the same building. Later the couple purchased a service station from Austin Brothers. For many years the station was Mobile and later changed to Sinclair. Helen was a housewife throughout their marriage. During this time she babysat for several different families in the area. Helen was the "go-to-person" for Russ. If he needed a part, off she would go in the car, loading up all the children and get the part Russ requested. She was known for her excellent cooking and baking skills. Helen had many joys in her life and also experienced profound sorrow in the loss of two children. Janet lost her life in a homicide and Kenneth died in a car accident. During this time she drew strength from her strong faith. Helen was active in St. Paul's Lutheran Church. She taught Vacation Bible School and was active in the Ruth Circle and Miriam Circle. She made craft and baked items for Good Shepherd and Bethesda Auxiliary. She was known far and wide for her net scrubbies. They were distributed from coast to coast and also in Japan and England. She preceded by her parents; husband Russell; daughter Janet; son Kenneth; brothers Clem (Mutt), Robert (Bob), Gerald (Jerry) and baby brother Douglas. Survivors include son Gary and wife Beanie of Julesburg; three granddaughters, Brandy (John) Pontious, Christina (Jonathon) Lanckriet Eeckhout and Veronica Wilkins (Thadd Corlett); great grandchildren Christian, Tristan, Aspen, and Autumn Lanckriet, Troy Eeckhout, Shayelyn and Kaden Allen, Takota Wilkins and Cian, Vidanna, Alarice and Thane Corlett; sister-in-law Lucy Price of Sedgwick; brother-in-law Bill Obermier and wife Shirley of Waco, NE; and many loving nieces and nephews. Funeral services are pending. Condolences may be shared at prairiehillsjulesburg.com. Prairie Hills Funeral Home of Julesburg is in charge of arrangements.

The family of Helen Obermier created this Life Tributes page to make it easy to share your memories.

Send flowers to the Obermier family.