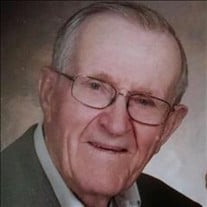 HARM "DEL" SPLITTER, 95 of Big Springs, passed away Thursday, January 25, 2018, at Sedgwick County Memorial Hospital. Del was born December 7, 1922, at Frederick, Kansas to Harm L. and Alma (Stoltenberg) Splitter. Following his graduation from Big Springs High School in 1940, Del earned a Regents Scholarship that allowed for him to attend a year of college at the University of Nebraska at Lincoln. In 1943, Del entered the U.S. Army, where he served in WWII. In December of that same year, he was united in marriage to Lois Johnson. Del was discharged in 1945, and the couple would eventually make their home on the Splitter family farm west of Big Springs. After the marriage ended, Del eventually married Minnie (Anderson) Kuskie on March 8, 1973. They made their home at Big Springs where they farmed and operated a radio and TV business. Del began to slow down in his 80's, and most recently, he and Minnie had been residing at the assisted living in Julesburg. Del was an ardent supporter and proponent of the community of Big Springs. He was proud to have been a part of the ag community and had been active in the Big Springs United Methodist Church, the school board, cemetery board, and American Legion. Del was smart and was a hard worker. He considered himself fortunate to have been able to make his living doing things that he loved all his life. He enjoyed spending time bowling throughout much of his life and had been quite active in bowling leagues over the years. When the time came for retirement, Del struggled, as he was somebody who had always liked to stay busy. Del was preceded in death by a daughter, Janet; great-grandson, Kai Lundstrom; brother, William Splitter, and a sister, Beth Slinger. Survivors include his wife, Minnie of Julesburg; son, Monty (Brenda) Splitter of Kearney, NE; daughters, Susan (Chuck) Campton of Canon City, CO; Diana Kellermeyer of Sahuarita, AZ; stepchildren, Don (Susan) Kuskie of Centennial, CO; Susan (Bruce) Klemme of Greeley, CO, and Ann Stanley of Glasgow, MT; 8 grandchildren; 7 step-grandchildren; 2 great-grandchildren; 6 step great-grandchildren; along with many other relatives and friends. Memorials are suggested to the Big Springs United Methodist Church or the Big Springs Fire Department in Del's memory. Condolences may be shared at prairiehillsjulesburg.com, where the service will be streamed live for those unable to attend. Memorial services will be held on Monday, February 12, 2018, at 10:30 a.m. at the Big Springs United Methodist Church with Pastor Bun Koo Lee officiating. Inurnment with military honors will be in the Big Springs Cemetery. Prairie Hills Funeral Home of Julesburg is in charge of arrangements.

The family of Harm "Del" Delmont Splitter created this Life Tributes page to make it easy to share your memories.

Send flowers to the Splitter family.