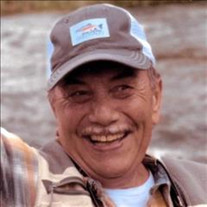 Gregory Jay Palser passed away July 12, 2021, in Newport, Oregon. He was born September 12, 1952, in Julesburg, Colorado, to Ivan and Mary Palser. The second of seven children, he was raised on the family farm in Big Springs, Nebraska. As a child and young man, he was involved in all aspects of the family farm, doing whatever he was tall enough to do. He learned to drive a truck around age seven, so he could help the men in the field. He not only learned to operate any piece of farm equipment but also spent many nights repairing equipment so that it was ready to be in the field the next day. He graduated from Big Springs High School in 1970. In the late 1970s, he moved to Albany, Oregon, to work as a diesel mechanic. A handful of years later, this move led to the formation of Mid-Coast Truck & Repair, which eventually expanded to become Mid-Coast Trucking. Mid-Coast trucking became well known up and down the West Coast for delivering fish and bringing back produce to the Northwest. In 1995 he sold Mid-Coast and spent a summer cruising across the United States on his motorcycle. When he returned, he directed his attention to Action Networks, a business he owned with his long-time business partner, Doug Updenkelder. Starting as a small copy and technology center, the business eventually became an internet service provider for rural communities. Their next business, CoastCom, grew out of a need for faster internet as fiber optics began to replace dial-up connectivity. CoastCom had two branches, Telecommunications and Fiber Optic Construction, and together they helped connect Oregon and the Northwest to high-speed internet. Their business sold in 2016, but Greg continued to serve as a Vice President of Business Development for Wave Broadband. He was a mentor to many and had a particular passion for projects involving laying underwater cables to far-flung places all over the world. Greg lived an abundant life. In 2010 he married the love of his life, Debbie Harland Palser. Together they enjoyed motorcycle rides, being grandparents to Morgan and Evelyn Harness, traveling, and spending time at home. Motorcycle riding was a passion he shared with his father, and he enjoyed multiple rides to Sturgis over the years with his son, parents, and other Palser family members. Greg also loved to fly fish, and you could find him every spring on the Deschutes with his best buddies. His heart never left Nebraska. In 2011, as he had more time and control of his schedule, he spent more time on the family farm. He especially loved corn harvest in the fall. The significant advances in technology in farming equipment made driving combine his favorite thing to do. He looked forward to being home, working the farm with his family, and enjoying shop parties with his nephews, nieces, and extended friends and relatives. One of the great joys of his life was starting a farming operation with his son AJ Palser, who died in 2019. The loss of his son impacted him deeply, and yet, he continued to live life fully. Greg Palser had the heart, confidence, and audacity to make the impossible possible. The sparkle in his eyes and easy smile will forever be in the memory of friends and family. A piece of our hearts went with him. He is preceded in death by his son AJ Palser; his father, Ivan Jay Palser; and his brother, Richard Edgar Palser. Survivors include his wife, Debbie Harland Palser; his mother, Mary Helen Palser; siblings, Carole Palser, Nita and Mark McGreer, Marilyn and Reverend Ken Volkert, Ivan Gene Palser, Will and Terri Palser; bonus children Shawn Harland, Mercedes, and Ben Harness; granddaughters Morgan and Evelyn Harness; and many extended family members and friends. Condolences may be shared at prairiehillsjulesburg.com. Graveside services will be Saturday, September 4, 2021 at 10:00 am at the Big Springs Cemetery with Pastor Todd Lanman officiating. Prairie Hills Funeral Home of Julesburg is assisting the Palser family.

Gregory Jay Palser passed away July 12, 2021, in Newport, Oregon. He was born September 12, 1952, in Julesburg, Colorado, to Ivan and Mary Palser. The second of seven children, he was raised on the family farm in Big Springs, Nebraska. As a... View Obituary & Service Information

The family of Gregory Jay Palser created this Life Tributes page to make it easy to share your memories.

Send flowers to the Palser family.