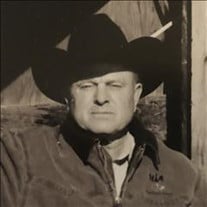 GLEN SANDQUIST, 77, of Sedgwick, passed away June 21, 2019, near his home. Glen was born November 1, 1941, at Haxtun, Colorado to Art and Iva (Peterson) Sandquist. He graduated from Haxtun High School with the class of 1959. On June 30, 1963, Glen married Thelma Appelhans at St. Anthony's Catholic Church in Julesburg. The couple made their home south of Sedgwick for a few years before eventually moving to Ovid. In the late 1960s, Glen and Thelma moved to Sedgwick. Their union was blessed with two girls, Chris and Debby. Glen worked on oil rigs, harvesting sugar beets, before going to work for the school in Sedgwick as a janitor and bus driver. In the mid-1970s, Glen went to work for Hi-Line Electric as a groundsman. His hard work and diligence propelled him into a position as a lineman, and eventually foreman, in a career that spanned over thirty years. Following his retirement, Glen and Thelma built a home in Sedgwick, where Glen loved raising horses. In later years, Glen was honored to serve as a County Commissioner. Glen was industrious and hard-working. He had an appreciation for bull riding and rodeo as well. Glen also enjoyed spending time at Lucy's Cafe, where he liked to eat and visit with friends. Glen was preceded in death by his wife, Thelma; his parents; three brothers, Allen, Dwayne and Gary; and a sister, Lois. Survivors include his daughters, Chris (Scott) Sandquist-Wolfe of Brighton, CO, Debby (Mark) Sandquist-Perlinger of Paxton, NE; grandchildren, Brayden (Caitlin) Wolfe, Brodie Wolfe, Collin (Amber) Perlinger, Carrick, Aidon & Bennett Perlinger; great-grandson, Ryker Perlinger; siblings, Jay (Cathy) Sanquist of Cochrane, Alberta, Doris Jecminek of Aurora, CO, and Edythe Kain of Mountain Home, ID; along with many other relatives and friends. A memorial has been established in Glen's memory with the intent to support the Hippodrome Arts Centre, along with other local projects. Condolences may be shared at prairiehillsjulesburg.com. Mass of Christian Burial will be on Friday, June 28, 2019, at 10:30 a.m. at St. Anthony of Padua Catholic Church in Julesburg with Fr. Mike O'Brien as Celebrant. Burial will be in the Sedgwick Cemetery. Visitation will be on Thursday, from 3 p.m. until 6 p.m. at the Prairie Hills Funeral Home in Julesburg. Prairie Hills Funeral Home of Julesburg is in charge of arrangements.

The family of Glen Sandquist created this Life Tributes page to make it easy to share your memories.

Customized sympathy cards. Mailed for you.