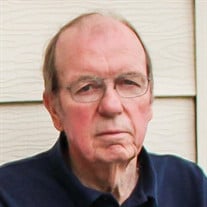 GERALD LEE KALB, 78 of Chappell, passed away September 15, 2017, at the Sedgwick County Health Center in Julesburg. Gerald was born May 19, 1939, at Chappell, Nebraska to Theodore and Francis (Mikoloyck) Kalb. He graduated from Chappell High School with the class of 1956. Gerald attended college in Ft. Collins where he studied agriculture. In 1962, he joined the National Guard and served for six years. On October 12, 1963, Gerald married Gwen M. Johnson at St. Joseph's Catholic Church in Chappell. The couple made their home on the Kalb family farm between Chappell and Julesburg and were blessed with two children, Jeff and Jennifer. Gerald farmed the family ground for his entire life and also was on the staff at the Chappell FSA office for 37 years. In 2009, Gerald was diagnosed with Parkinson's Disease. Despite the diagnosis, Gerald remained active on the farm for as long as he could. In addition to agriculture, Gerald was passionate about drag racing. He spent countless hours building drag racers over the years; and logged many miles traveling the racing circuit. When his children were born, Gerald slowed down, opting instead to spend his time supporting them in their activities. When his grandchildren were born, Gerald's life took on new meaning, and he enjoyed every minute he got to spend with them. In 1991, Gerald was honored by FSA for his achievements in farm administration and excellent public relations with farmers. This national recognition included travel to Washington D.C., which was a trip that was very meaningful to Gerald. Gerald was preceded in death by his parents. Survivors include his wife, Gwen of Chappell; son, Jeff (Trish) of Albuquerque, NM; daughter, Jennifer (Todd) Wortmann of Englewood, CO; 4 grandchildren, Marie and Brian Kalb; Trevor and Cassidy Wortmann; sister-in-law, Charlene Wilber of Julesburg. A memorial has been established in Gerald's memory for later designation by the family. Condolences may be shared at prairiehillsfuneralhome.com. Mass of Christian Burial will be Monday, September 18, 2017, at 10:00 a.m. at St. Anthony's Catholic Church in Julesburg. Burial will be in the Chappell Cemetery. Rosary will be on Sunday, September 17, 2017, at 7:00 p.m. at St. Anthony's Catholic Church. Prairie Hills Funeral Home of Julesburg is in charge of arrangements.

GERALD LEE KALB, 78 of Chappell, passed away September 15, 2017, at the Sedgwick County Health Center in Julesburg. Gerald was born May 19, 1939, at Chappell, Nebraska to Theodore and Francis (Mikoloyck) Kalb. He graduated from Chappell High... View Obituary & Service Information

The family of Gerald Kalb created this Life Tributes page to make it easy to share your memories.

Send flowers to the Kalb family.