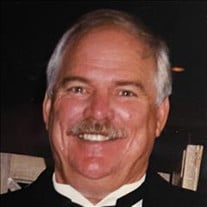 GARY ALLEN OBERMIER, 69 of Julesburg, passed away November 21, 2020, at Melissa Memorial Hospital in Holyoke, Colorado. Gary was born March 6, 1951, at Julesburg, Colorado, to Russell and Helen (Price) Obermier. Gary was baptized at St. Paul's Lutheran Church on April 1, 1951, and was confirmed on April 11, 1965. He graduated from Julesburg High School with the class of 1969 and went on to graduate from the University of Northern Colorado at Greeley with a degree in Political Science. While attending college, Gary was also active in the Sigma Phi Epsilon fraternity, where he also held the position of president. Following the tragic death of his siblings, Janet and Kenneth, Gary moved back to Julesburg to support his parents. He worked with them for many years at their Mobile station, which later became Sinclair. Gary delivered fuel throughout the area for years and made countless good friendships during that time. On September 1, 1991, Gary was united in marriage to Belinda "Beanie" Yakel, and the couple made their home on a farm outside of town. Gary always joked that the anniversary date was indicative of his life, 911, a call for help. Gary's heart expanded and softened with the birth of each of his grandchildren. In 1998, Gary took a position on the Sedgwick County Roads Department as a heavy equipment operator, which he did for fifteen years. He enjoyed his time on the road grader, retiring in 2016. Gary was a man of exceptional heart. He was as sentimental and honest as he was sharp-witted and intelligent. He had a heart for his family, his community, and even his cattle. Gary was bold in many ways, perhaps the greatest of which was his openness to be known and seen by others in an authentic way. He was a deep thinker and had a knack for seeing the beauty and significance in the world around him. The gravity of special moments did not elude Gary. Gary also had a love for his community. He gave of his time and talents in innumerable ways, from Lion's Club, Sedgwick County Fair Board, Jaycees, Town Board, to spending a term as Mayor. One of Gary's favorite holidays was Halloween. He spent many years helping with the construction of the Julesburg Haunted House, and even though he was a large man, he excelled in his ability to jump out and scare people. Gary was a mainstay in Julesburg; his devotion was driven by a real sense of love for where he came from. Gary also had a wonderful sense of humor, which sometimes led to the playing of pranks. The target he fancied most was always his beloved wife, Beanie. The two shared many beautiful memories, laughs, and occasional scared outcries. Gary will be remembered for having a heart that was as big as he was. He will be sorely missed by those who knew and loved him. Gary was preceded in death by his parents and siblings, Janet and Kenneth. Survivors include his wife, Beanie Obermier of Julesburg; children, Brandy (John) Pontious, Christina (Jonathan) Lanckriet Eeckhout, Veronica Wilkins (Thadd Corlett); grandchildren, Christian and Skylar Lanckriet, Tristan, Aspen, and Autumn Lanckriet, Troy Eeckhout, Shayelyn, and Kaden Allen, Takota Wilkins, and Ryleigh, Cian, Vidanna, Alarice, and Thane Corlett; along with many other relatives and friends. Memorials are suggested to the Sedgwick County Health Rehab Center in Gary's memory. Condolences may be shared at prairiehillsjulesburg.com. Memorial services will be held on Friday, December 11, 2020, at 10 a.m. at the St. Paul Lutheran Church in Julesburg, with Rev. Trenton D. Christensen officiating. Commital will be in the Julesburg Hillside Cemetery. Prairie Hills Funeral Home of Julesburg is in charge of arrangements.

The family of Gary Obermier created this Life Tributes page to make it easy to share your memories.

Send flowers to the Obermier family.