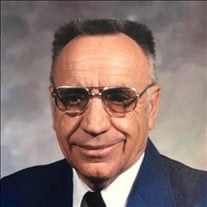 FREDERICK A. RECK, 90, of Julesburg, CO, passed away Thursday, March 29, 2018 at Sedgwick County Memorial Hospital in Julesburg. Fred was born October 22, 1927, at Ft. Morgan, Colorado to William T. and Herta L. (Neufeldt) Reck. He was raised on the family homestead farm between Ft. Morgan and Byers. He attended the Potty Brown Grade School, then, High School in Ft. Morgan. In 1946, Fred was drafted in to the US Army, where he was stationed in the Philippines while he served as an aircraft mechanic. He was honorably discharged in 1947, and returned to work on the family farm in rural Wiggins. In 1949, Fred met the love of his life, Opal Imhof, at the Homestead Grange. They were married in Denver on January 13, 1952. In 1961, Fred won the Homestead Grange Talent Contest and went on to the National Grange Convention in Worcester, MA. He would then go on to New York City, where he was selected to sing "Asleep in the Deep" during the Ted Mack Amateur Hour. In 1967, Fred was transferred to Julesburg as the manager of Wycon Chemical Co. In 1972, Fred sold minerals and silage conditioner for Stout-Wall Research of Loveland, CO. In 1988, Fred and Opal started their own business, Southwest Feed Products, where they manufactured silage and soil conditioner. Fred was a member of the Masonic Lodge A.F. & A.M., the American Legion, VFW, and the United Methodist Church. In May 2012, Fred had the honor of participating in the Northern Colorado Honor Flight to Washington, DC. Fred was preceded in death by his parents, William and Herta Reck, and his siblings: Carl, Earnest, Bob, Ruth, Chester, and George. Fred was survived by his loving wife, Opal of Julesburg: brother, Virgil Reck, sister-in-law, Doris Imhof; along with many nieces, nephews, and friends. A memorial has been established in Fred's memory for later designation. Condolences may be shared at prairiehillsjulesburg.com A memorial service will be held on Friday, April 6, 2018, at 2:00 p.m. at the Julesburg United Methodist Church with Pastor Bun Koo Lee officiating. Interment of Cremains will be in the Hoyt Cemetery southwest of Wiggins, CO at a later date. Prairie Hills Funeral Home of Julesburg is in charge of arrangements.

The family of Frederick A. Reck created this Life Tributes page to make it easy to share your memories.

Send flowers to the Reck family.