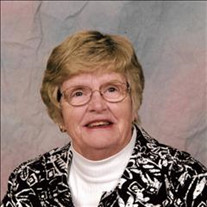 FAYE CATHERINE RADEL, 79 of Julesburg, passed away April 23, 2020, at the Melissa Memorial Hospital in Holyoke. Faye was born May 24, 1940, at Julesburg, Colorado, to Sam and Loree (Smith) Mikelson. She graduated from Ovid High School. In 1962, Faye was united in marriage to Larry Radel. The couple made their home in Julesburg, and their union was blessed with two sons, Kevin and Brian. Faye worked at Hartung's Clothing Store downtown before going to work for Gambles. In 1987, she and Larry opened their appliance store, which they ran until Larry's death in 1991. After Faye sold the business, she went to work at the pharmacy. Faye grew up on a farm, and as such, was a country girl at heart. She loved being outside. Faye loved to socialize, which was one of the reasons she always enjoyed working in retail. To say Faye was an enthusiastic supporter of her children's sporting events might be an understatement, as she was unapologetically the loudest voice in the stands. Faye was also a woman of great faith. She had to lean on that faith hard during the losses of both her husband and son, Kevin. Now, her faith in Jesus has indeed become sight, and Faye is at rest. She will be remembered for many things, especially the ways she loved others as both a caregiver and matriarch. Faye was preceded in death by her husband, Larry; son, Kevin; brother, Gene; and sister & brother in law, Gwen and Johnny Nein. Survivors include her son, Brian (Jodi) Radel of McCook; grandchildren, Tatum and Jaimee; nephew, Rick (Barb) Mikelson of Julesburg; great-niece and nephews, Cassandra, Corey, and Chad; along with many other relatives and friends. Private family services will be held at the Prairie Hills Funeral Home in Julesburg with burial at the Ovid Cemetery. A memorial has been established in Faye's memory for later designation. Condolences may be shared at prairiehillsjulesburg.com, where a recording of Faye's services will be posted on Tuesday, April 28th at 10 a.m. for those unable to attend due to the health restrictions in place. Prairie Hills Funeral Home of Julesburg is in charge of arrangements.

FAYE CATHERINE RADEL, 79 of Julesburg, passed away April 23, 2020, at the Melissa Memorial Hospital in Holyoke. Faye was born May 24, 1940, at Julesburg, Colorado, to Sam and Loree (Smith) Mikelson. She graduated from Ovid High School. In... View Obituary & Service Information

The family of Faye Radel created this Life Tributes page to make it easy to share your memories.

Send flowers to the Radel family.