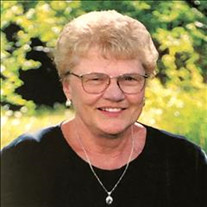 MARGARET "ELLEN" CAMPBELL, 84 of Julesburg, passed away May 4, 2020, at the Univesity of Colorado Medical Center in Denver. Ellen was born June 21, 1935, at Perry, Oklahoma, the youngest of three children to John and Pearl (Copeland) Edgar. The family moved to Kinsley, Kansas, where they purchased the Taylor Motel. Ellen graduated from Kinsley High School with the class of 1953. After graduating from Clark's Business School in Topeka, KS, Ellen moved to Denver, where she worked for Schwayder Bros Luggage Company. On March 4, 1956, Ellen married Dean Campbell at Kinsley, KS. The couple made their home in Stratton, CO, where Ellen worked for the Stratton Press Newspaper. She enjoyed playing women's softball in the summers and bowling in the winter. They adopted a daughter, Karla Dee, in August of 1963, and later a son, Kacey Dean, was born in December of 1967. The family would eventually move to Holyoke, CO, where Ellen worked at the local bank. They would eventually purchase Westside Liquor in Julesburg, which brought them to the area. After selling the store, Ellen went to work for the Julesburg Advocate Newspaper as a reporter. Ellen later went to work managing the front desk at the Platte Valley Inn, retiring in 2015. Ellen enjoyed participating in sports in her younger years. She also enjoyed traveling. Ellen and Dean went on three trips that they especially cherished, having vacationed to Spain and taken two cruises to Brazil. Ellen enjoyed watching her grandchildren at their ballgames, eating out with "the gals," and having coffee with her friends. Ellen was preceded in death by her husband, Dean, in 1988; sister, Evelyn (Lewis) Mace; sister-in-law, Virginia Edgar; & her parents-in-law, Sarah (Cecil) Campbell. Survivors include her daughter, Karla of Oakland, CA; son, Kacey of Julesburg; grandchildren, Ashley (Seth) Baker, of Ovid, CO, Cody Woodhams of Ovid, CO; great-grandchildren, Juston Dean and Ayden; brother, John Max Edgar of Ft. Worth, TX; along with many other relatives and friends. A memorial has been established in Ellen's memory for later designation. Condolences may be shared at prairiehillsjulesburg.com. Private family services will be held at a later date. Inurnment will be in the Julesburg Hillside Cemetery. Prairie Hills Funeral Home of Julesburg is in charge of arrangements.

MARGARET "ELLEN" CAMPBELL, 84 of Julesburg, passed away May 4, 2020, at the Univesity of Colorado Medical Center in Denver. Ellen was born June 21, 1935, at Perry, Oklahoma, the youngest of three children to John and Pearl (Copeland) Edgar.... View Obituary & Service Information

The family of Ellen Campbell created this Life Tributes page to make it easy to share your memories.

MARGARET &quot;ELLEN&quot; CAMPBELL, 84 of Julesburg, passed away May 4,...

Send flowers to the Campbell family.