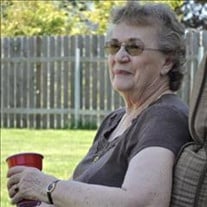 ELLA FAYE SCOTT, 86 of Ovid, passed away Monday, April 20, 2020, at Regent Park Nursing and Rehabilitation in Holyoke. Ella was born January 16, 1934, at Monte Vista, CO, to Harry and Pearl (Wright) Burkhart. She graduated from Sargent Consolidated Schools in CO before attending Stephens College in Columbia, MO, and later, Colorado A & M in Ft. Collins, CO. In 1955, Ella married Robert H. (Bob) Scott at Center, CO. The couple lived on the western slope for most of their lives, where Bob worked as a cattleman. Bob ranched in the McCoy and Burns area then subsequently moved to Fruita and Cortez. Ella had taught kindergarten and did home extension and 4-H work in Eagle County before getting into retail work. She first worked at the Fruita Coop, then Grand Junction Western Wear, and eventually Four Seasons Greenhouse and nursery in Dolores. In 1998, Bob took a job at Hi-Vu Cattle north of Sedgwick, CO, which brought him and Ella to the Sedgwick County area. Ella worked at Creative Beginnings in downtown Julesburg, and also part-time at the Ovid Post Office. Ella loved working in the yard and spending time in her flower garden; she especially loved iris. She also liked crafting and did ceramics for many years. She taught ceramics in Cortez, and she and Bob were both long time 4-H leaders in Eagle County. Ella made many fun memories playing dominoes with her dear friends. She was a bit of a Colorado historian and thoroughly enjoyed volunteering at the Welcome Center. Ella was quite sociable and loved to chat and tell stories. She bragged on her kids and grandkids whenever she got the chance, as she was very proud of her family. Her grandkid's graduations and weddings were delightful trips for her as well as summer excursions with her daughters. Ella, Bob, and the entire community enjoyed their miniature donkeys on their property east of Ovid. She made fast friends, and perpetually wore a smile. Ella Faye was at her happiest when she was among family. She was the instigator often and in the middle of scrabble, dominoes, or any other game to be played as well as loving jigsaw puzzles. Ella soaked up those family moments every chance she got. She also loved every sport and would watch and pick her favorite, whether it was ice skating or football. Ella watched many games with family but also enjoyed them on her own and would frequently be texting a couple of her girls while cheering for her favorite teams. Her faith in Jesus was foundational in her life. She was baptized as a child at Sargent Community Church and was currently a member of the Ovid United Methodist church. When her health began to fail, Ella never lost her peace due to her faith in eternal life. She now enjoys a peace beyond measure. Ella Faye was preceded in death by her parents Harry and Pearl, her husband, Robert (Bob); four brothers, as well as three of their wives, H. Ray( Eileen), Roy D. (Ona Lee), Walter L. (Arlene), and John W. Burkhart; niece, Laurie Burkhart; nephew, Roy D. Burkhart II; niece, Shawna Bost; brother-in-law, Bob Botley; sister-in-law, Lorene (David) MacCallum; and infant great-granddaughter, Kadence Gates. Survivors include her children, Keith (Kendra) Scott of Burns, CO, Kaye (Doug) Dean of Imperial, NE, Karen (Rigg) Lechman of Julesburg, CO, Kelly (Doug) Gates of Toponas, CO, Kenneth (Kelli) Scott of Craig, CO and Kimberly Scott (Jay Hughes) of Wagoner, OK. Fourteen grandchildren, Kurtis (Desiree) Scott, Kensie (Scott) Redden, Kassandra (Logan) Junghanns, Krystle (Adam) Rhoades, Scott (Katie) Dean, Erin (Joe) Sittner, Adam Lechman, Shiloh (Jay) Whaley, Hyatt Gates, Whittier (Tiffany) Gates, Kyler (Jessica) Scott, Kadriana (Justin) Wright, Mariah (David Ordaz) Patton, Madison White and fiance, Gage Koenen. Twenty-seven great-grandchildren with one on the way; her sister, Anna Mae Botley; her sister-in-law, Ann Burkhart; several nieces and nephews; and numerous cherished friends. A memorial has been established in Ella's memory for later designation. Condolences may be shared at prairiehillsjulesburg.com. A celebration of Ella Faye's life will be held Friday, June 26, 2020 at 10:30 am at the Julesburg United Methodist Church with Pastor Kristie Firme officiating. Inurnment will take place in the Monte Vista CO cemetery at a later date. Prairie Hills Funeral Home of Julesburg is in charge of arrangements.

The family of Ella Faye Scott created this Life Tributes page to make it easy to share your memories.

Send flowers to the Scott family.