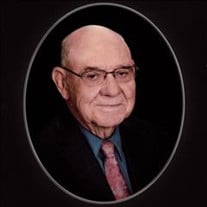 EDWARD "BILL" WILLIAM SAUDER, 89 of Julesburg, passed away Friday, August 3, 2018 at Sedgwick County Memorial Nursing Home in Julesburg. Bill was born in Lodgepole, Nebraska on February 16, 1929 to Michael and Mabel (Holtman) Sauder. The third eldest of 8 sons, he graduated from Chappell High School where he was active in 4-H, sports and served as the Nebraska State F.F.A. Treasurer. While stationed for four years in Texas as an Air Force instructor, Bill met Nancy Allen. They were married June 21, 1952, and lived in Amarillo, Texas welcoming two children. They moved their family to Sedgwick County in 1955. The family farmed south of Sedgwick for 28 years and moved to the town of Sedgwick in 1963 to live in their home on Main Avenue. In 1985, they sold their farm and Bill went to work for the State of Colorado Soil Conservation Board, monitoring irrigation wells and water management in Sedgwick and Phillips Counties. He semi-retired in 1995. Since then he kept busy working for Michael Auction Service of Julesburg. Bill was a charter member and past president of the Sedgwick Lions Club. He served for a number of years on the Sedgwick Town Board as a trustee and several times as mayor. He participated in the Sedgwick Library and served as Treasurer. Bill volunteered 20 years on the Sedgwick Fire Department where he led as Fire Chief. Bill was elected to serve the residents of Sedgwick County for 3 consecutive 4-year terms as county commissioner, assuming a leadership role as president of the 13-county Northeast District of the County Commissioners Association. In his capacity as commissioner, he also served as ex-officio member to the hospital board, planning and zoning, weed board, fair board, doctor placement committee, Sedgwick sewer committee and the Sedgwick Centennial Committee. Bill has been an active member of St. Paul's Lutheran Church where he has served as Elder. Bill is survived by his wife of 66 years, Nancy; children, Kathy Magill of Greeley, CO, David (Konni) Sauder of Big Springs, NE, Patty Melnice (Raymond Schneider) of Denver, CO, Robert (Margo) Sauder of Haxtun, CO, and Jeanie Sauder of Redondo Beach, CA; 11 grandchildren; 15 great-grandchildren; brothers, Jack, Roy, Dick, Fred, and Joe; extended family and many cherished friends. He was preceded in death by daughter, Julie, who died at 15 months of age; brothers, Larry and Dan, and son-in-law, John Magill. Memorial services will be Saturday, August 11, 2018 at 10:00am at St. Paul's Lutheran Church in Julesburg with Rev. Trenton D. Christensen officiating. Inurnment will be in the Chappell, NE Cemetery later in the afternoon. The family suggests any memorials be directed to the Sedgwick Fire Department and/or the Sedgwick Jailhouse Museum. Condolences can be shared at prairiehillsjulesburg.com. Prairie Hills Funeral Home of Julesburg, CO is in charge of arrangements.

The family of Edward "Bill" William Sauder created this Life Tributes page to make it easy to share your memories.

Send flowers to the Sauder family.