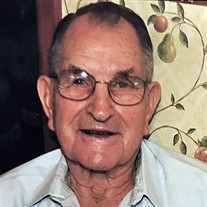 Earl Melvin "Mike" Abts, longtime resident of Big Springs, NE, died Friday, December 29, 2017, at the Sedgwick County Nursing Home in Julesburg, CO where he had resided since January 2014. Mike was born to Clyde and Deana (Fritzen) Abts on October 18, 1926, at Brule, NE. He attended country school until 7th grade when the family moved from their farm into the town of Big Springs. Mike graduated from Big Springs High School in 1944. He married Irene Steinke on June 22, 1947. Mike was baptized and confirmed in the Christian faith at St. Paul's Lutheran Church in Julesburg, CO on March 29, 1950. Mike worked as farm labor until 1952 when he, his wife and two children moved to Big Springs where he was employed by Co-op Gas Station; first as an attendant and then as fuel delivery and manager until his retirement in 1988. In retirement, he enjoyed carpenter work and refinishing furniture. Survivors include his wife of 70 years, Irene of Julesburg, CO; son, Murl (Judy) Abts of Julesburg; daughter, Judy (Jerome) Dixon of Omaha, NE; 5 grandchildren, Ryan (Denise) Abts of Scottsbluff, NE; Kellie (Scot) Bandel of Kearney, NE; Kristi (Brian) Kim of Rochester, MN; Chad (Meredith) Dixon of Omaha, NE; Wendy (Mark) Roth of Bennington, NE; 10 great-grandchildren, and 1 great, great grandson, and several nieces and nephews. Mike was preceded in death by his parents, four brothers, and five sisters. Memorials are suggested to Zion Lutheran Church of Big Springs in Mike's memory. Condolences may be shared at prairiehillsfuneralhome.com, where the service will be streamed live for those unable to attend Services held on Tuesday, January 2, 2018, at 11:00 a.m. at the Zion Lutheran Church in Big Springs with Pastor Trenton D. Christensen officiating. Burial will be in the Big Springs Cemetery. Prairie Hills Funeral Home of Julesburg is in charge of arrangements.

The family of Earl "Mike" Abts created this Life Tributes page to make it easy to share your memories.

Send flowers to the Abts family.