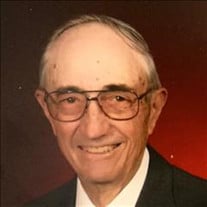 Douglas Dean Hagemann passed away peacefully on August 10, 2021, at his home in Julesburg, CO. He was born June 19, 1928, to George and Frances (Gentert) Hagemann on the family farm, the youngest of six children. He was baptized in the Lutheran church on July 15, 1928, confirmed at St. Paul's Lutheran Church, Julesburg, July 15, 1941, and continued as a lifelong member of St. Paul's Lutheran. District 6-grade school south of Julesburg was located at the end of their quarter-mile-long driveway where he walked to complete elementary school. After graduating from Julesburg High School in 1945, he served in the Army as a construction and demolition specialist between September 1951 and June 1953, having been deployed to Korea during the Korean Conflict. When returning to Colorado, he and Lois Gratopp were married at St. Paul's Lutheran Church in Julesburg on November 22, 1953. During their 67 years of marriage, four daughters were born to this union, Sandy, Deann, Tracy, and Korie. Dryland wheat farming and raising Black Angus cattle commenced on the Hagemann farm east of Julesburg. Doug was an active community member through serving on the ASCS County Committee for nine years, the rural fire board, the school Accountability Committee and had also held the church offices of elder and finance board member. He was a life member of American Legion Post 105 along with the VFW. Hunting and bowling were past times that he truly enjoyed. One of his accomplishments was bowling a 300 game at Melody Lanes in Julesburg in 1962. He loved sharing jokes, visiting with friends, westerns, reading farm magazines, and eating ice cream and mashed potatoes and gravy. Amidst farming and ranching work, he found time to volunteer for church activities and consistently for 30 years with Orphan Grain Train. He was preceded in death by his parents, daughter Tracy Cravens, brothers Marvin, Vaughn, and Burdell, and sisters Lela Sullivan and Lorene Ingwersen. Family surviving him include his wife, Lois; daughters, Sandy (John) Fryar, Deann (Richard) Anderson, and Korie Williams; son-in-law, Chris Cravens; grandchildren, Aaron Fryar, Stacey Fryar, Amy Fryar, and John (Britney) Fryar, Zachary (Vanessa) Anderson, and Faith (Corey) Huston; and numerous great-grandchildren and great-great-grandchildren. Memorial donations may be sent to the family, citing Doug Hagemann Memorial at 614 W 5th St, Julesburg, CO 80737 with the intention of donating to St. Paul's Lutheran Church, Orphan Grain Train, and Hospice of the Plains. Condolences may be shared at prairiehillsjulesburg.com, where the service will be streamed live. Funeral services are scheduled for Saturday, August 14, 2021, at 10:30 am, St. Paul's Lutheran Church, Julesburg CO, with Rev. Trenton D. Christensen officiating. Committal with military honors will be in the Julesburg Hillside Cemetery. Visitation will be on Friday, from 2 pm until 6 pm, at the Prairie Hills Funeral Home in Julesburg.

Douglas Dean Hagemann passed away peacefully on August 10, 2021, at his home in Julesburg, CO. He was born June 19, 1928, to George and Frances (Gentert) Hagemann on the family farm, the youngest of six children. He was baptized in the Lutheran... View Obituary & Service Information

The family of Douglas D. Hagemann created this Life Tributes page to make it easy to share your memories.

Send flowers to the Hagemann family.