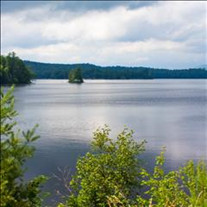 Dorothy F. Buttle, 65, of Crook, Colorado, passed away Friday, February 11, 2022, surrounded by her family. Dorothy was born September 12, 1956, in Julesburg, Colorado, to Robert and Mae (Miller) Buttle. She graduated from Caliche High School with the inaugural class of 1975. Dorothy worked at the feedlot in Proctor, Colorado, for a number of years. In the late 1980s, she went to work for the state highway department, where she worked many positions, including driving a snowplow. Dorothy retired in the early 2000s. Never one who enjoyed idleness, she would eventually work at the recycling center and thoroughly enjoyed the people she worked with. Dorothy "Dort" was tough and gritty. She was straightforward with people; one of the many things her friends appreciated about her personality. There was a season of Dorothy's life where she was an avid NASCAR fan; however, she retired from her fandom the same year Mark Martin retired. Dorothy had a great love for animals, especially dogs and horses. Her relationship with her son, Bronson, was a special one, and they both cherished the times they spent together fishing, visiting, or saying nothing at all. Dorothy was preceded in death by her parents and siblings, Albert and Robin Buttle. Survivors include her son, Bronson and his partner, Ali Kuhlman, Sedgwick, CO; siblings, Kelly (Connie) Buttle, Los Lunas, NM, John (Kathy) Buttle, Scottsbluff, NE, Polly Waters, Gunnison, CO, Bonnie Fraass, Crook, CO, Harry Buttle, Crook, CO, Thelma (Tracy) Hildreth, Gunnison, CO, lifelong friend, Vicki Ocken, Castle Rock, CO, along with many nieces and nephews. A memorial has been established in Dorothy's memory for later designation. Condolences may be shared at prairiehillsjulesburg.com . A celebration of Dorothy's life will be held at a later date. No interment is planned at this time. Prairie Hills Funeral Home in Julesburg is in charge of arrangements.

The family of Dorothy Buttle created this Life Tributes page to make it easy to share your memories.

Send flowers to the Buttle family.