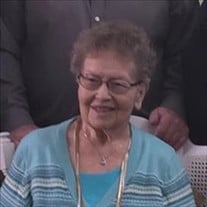 DORIS MAE BOWKER, 93 of Julesburg, passed away Tuesday, June 30, 2020, at the Sedgwick County Nursing Home in Julesburg. Doris Mae Kues was born in Fleming, CO on November 29, 1926, to Karl Whilhelm and Wilhelmina Anna (Mettscher) Kues. She attended school in Fleming and graduated there in 1944. She attended Barnes Business School in Denver CO, and worked at Sadler Furniture as a bookkeeper, until she was diagnosed with Polio, and returned to Fleming. After treatment, she worked at a Dept. Store in Haxtun CO, then came to Julesburg to live with the Rev. Bauer family. She worked at J.M. McDonald Co. there, serving for a time as Ready to Wear buyer. On May 21, 1950, she was united in marriage to Beryl E. Bowker in the Julesburg United Methodist Church. To this union were born two children, Yvonne Kay, and Ronald Ray. They were joined in 1960 by a niece Marge, who became a part of their family, and was considered as a daughter. Doris loved doing crafts, sewing, and doing things with her family. They especially enjoyed time together at their trailer at Otter Creek by Lake McConaughy, for many years. She was active in Church organizations, serving as Chairman of Christian Women's Club, and also as a consulting coordinator and guide of the Friendship Bible Coffees. After moving to Assisted Living in Julesburg, she also held Bible Studies there. She was a long time member of the United Methodist Church and UMW. The family built and owned Arrow Acres Cafe and Drive-In, west of Julesburg, across from the Airport and the Drive-In-Theater. They worked in it as a family. There were summer jobs for extended family at the cafe. They also owned and operated several grocery stores in Julesburg, where she served as bookkeeper, clerk, and for a time, manager of the one in Venango. She was preceded in death by her husband, Beryl; her parents; one brother, Don; seven sisters, Gladys, Doretta, Betty, Arlene, Roma, Lavern, and Gloria. Survivors include a daughter, Yvonne Kay and husband Greg Pratt, and grandsons, Ryan Pratt; Terron Pratt and wife Michelle, great-granddaughters Parker and Leighton; Todd Pratt and wife Jennifer and great-grandchildren Madelyn, Austin, and Andrew; a son, Ronald Bowker of Ogallala, Ne; a daughter, Marge Freeman, and husband Lou, of Chappell, Ne; grandchildren, Shayne of Chappell, and Starrla and husband Dana Klaksvik of Fergus Falls, MN, great-granddaughter, Olivia and great-grandson, Levi; two brothers, Harold Kues & Mary Lee of Fleming CO, and Herb Kues & Joyce of Del City, OK; along with many nieces and nephews, to whom she became a second mother. A memorial has been established for later designation. Condolences may be shared at prairiehillsjulesburg.com. Services for Doris will be held at a later date. Prairie Hills Funeral Home of Julesburg is in charge of arrangements.

The family of Doris Mae Bowker created this Life Tributes page to make it easy to share your memories.

Send flowers to the Bowker family.