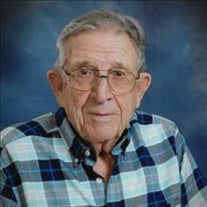 Don Galen Rundall, age 95 a life-long resident of Sedgwick County passed away January 29, 2022, in Julesburg, Colorado. Don was born to Mary Alice Rundall and John Alva Rundall on October 24, 1926, in Ovid, Colorado. Siblings were Reuben Rundall, John Rundall, Paul Rundall, Bill Rundall, Marian Rundall Bragdon, Keith Rundall, and Doris Rundall Stohler. He graduated from Ovid High School in May 1944. Upon graduation from high school, he entered the Navy Seabees. He returned to Ovid after two years of service in the Navy. He married his childhood sweetheart, Mary Ethel Smith, July 6, 1948. His father, Jack employed Don and brothers John and Keith in the Rundall Construction Company. He began work at the Farmer's Elevator in 1959 where he was mentored by Joe Zersen, the owner. Don earned an opportunity to become a major stockholder in the company, and made trips to Mexico, Egypt, France, Italy, and Iran to promote trade of beans to other countries. Prior to his retirement in 1993, Don sold his shares in the Farmer's Elevator to Kelley Bean Company. Don enjoyed his relationships with the farmers in the area and other grain dealers in the western states. Throughout his life Don showed a love of community. He strived to improve life for his neighbors and friends. He served as mayor of Ovid, as a volunteer fireman, and a school board member. He was a member of the Ovid Lions Club for as long as it was in existence and enjoyed membership in the Ogallala Elks. He supported the Ovid Methodist Church and enjoyed the fellowship of fellow attenders, he spent many hours caring for the church and its grounds. Left to mourn his passing and to celebrate a life well lived are his children, Gary "Butch" (Renee) Rundall, Pamela (Hugh) Anderson, Penelope (Bruce Scott) Weiss, Sue (John) Hartwell, Rebecca (Brad) Otsuka; grandchildren, Rachael (Jack Penley) Weiss, Andrew (Allison Alter) Weiss, Laura (Mike) Killean, Sarah Rundall, Erik Anderson, Jessica (Phil Oppenheimer) Anderson, Dylan (Tim) Weber-Rolly, Alexander (Jessica) Weber; great-grandchildren, Sophia Killean, Declan Killean, Ella Killean, Lincoln Rolly, and Kendrick Rolly as well as beloved nieces, nephews, and friends. He was preceded in death by his parents, his beloved wife, and his siblings. The family wishes to thank the staff of the Sedgwick County Nursing Home for their care and kindness shown to their father, grandfather, and great-grandfather. A special thank you to Hospice Care nurse, Mary Hughes for the comfort and support she provided to Don and his family. Don enjoyed the friendship and support of his neighbors Harry Hernandez, Carol and Bernie Dunker, and Mitz Otsuka. In lieu of flowers, a memorial has been established in Don's memory for later designation. Condolences may be shared at prairiehillsjulesburg.com, where the service will be live-streamed for those unable to attend. Funeral Services will be Friday, February 11, 2022, at 10:00 am at the Ovid Methodist Church with Pastor Ceciliah Igweta officiating. Inurnment to follow at the Ovid Cemetery with Military Honors. Prairie Hills Funeral Home of Julesburg is in charge of arrangements.

The family of Don G Rundall created this Life Tributes page to make it easy to share your memories.

Send flowers to the Rundall family.