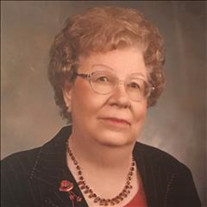 DESSIE ELLA BUCHHOLZ, 96 of Chappell, NE formerly of Julesburg, CO, passed away Monday, June 4, 2018 at Sidney Regional Medical Center. Dessie was born on July 1, 1921 to Clarence and Dessie (Hollinsworth) Kestler, in North Platte NE. Dessie was baptized on April 2, 1944 and was married to Victor Herman Buchholz from Julesburg CO. On June 19, 1950 at the First Methodist Church in Holyoke CO. They resided on a farm south of Julesburg CO. for 36 years where both were involved in farming. Dessie also had a great love for her chickens and rabbits. To this union two children were adopted. Gregory Buchholz and Ruby (Buchholz) Timm. Dessie became a member of the St. Pauls Lutheran Church in Julesburg CO on March 11, 1951. She was very active in the church, teaching Sunday School, and Midweek for over twenty years. She was always ready to assist with any church event or dinner. Dessie moved into town several years after Victor passed away and later moved to Chappell, NE. where she lived for over seven years. She then moved to Sidney Nursing home for five months before passing away at the Sidney Regional Medical Center. Dessie enjoyed gardening, flowers, canning, reading, cross stitching and the farm life. She also enjoyed her grand and great grandkids, always interested in knowing how they were doing and what was new in their lives. Survivors include one son, Greg (Louise) Buchholz of Sterling, CO; daughter, Ruby (Rocky) Timm of Chappell, NE; sister, Norma Jean Springer of Denver, CO; four grandchildren, Trevor Buchholz, Kyah (Chad) Loos, all of Sterling CO, Allie (Travis) Broderick, and Shelby Timm of Chappell, NE; five great-grandkids, Kendra, Kimber and Konrad Broderick, Payton Buchholz and Karter Loos. Dessie was preceded in death by her parents; husband, Victor; sisters in law, Ruth Buchholz and Leota Kestler. Dessie was the oldest of six siblings. Those that have passed are her brother, Donald "Buddy" Kestler, and sisters, Clara Boro, Nellie Thrasher and Ellen Hansen. Memorials are suggested to St. Paul's Lutheran Church in Julesburg, CO. Condolences can be shared at prairiehillsjulesburg.com. A memorial service will be held on Thursday, June 7, 2018 at 10:00am at St. Paul's Lutheran Church in Julesburg with Rev. Trenton D. Christensen officiating. Inurnment will be in the Hillside Cemetery at Julesburg. Prairie Hills Funeral Home of Julesburg is in charge of arrangements.

The family of Dessie Ella Buchholz created this Life Tributes page to make it easy to share your memories.

Send flowers to the Buchholz family.