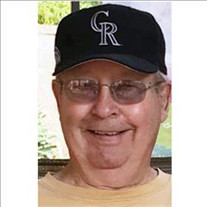 Delbert Dean Anderson, 81, of Julesburg, passed away January 29, 2018, at the Sedgwick County Hospital in Julesburg. Delbert was born December 27, 1936, in Gove County, Kansas to Clarence and Melissa "Faye" Nelson. He graduated from Healy High School in 1955. Delbert entered the U.S. Army in 1956 and was honorably discharged in 1959. In 1965, Delbert married Patsy J. Pinkston at Scott City, Kansas. The couple made their home in Healy, where they were blessed with two children, Larry and Kathy. While in Healy, Delbert worked for a farmer as well as the local grain elevator. In the early 1980's, the couple moved to Julesburg where he worked at the Kontny Grain Elevator, retiring at the age of 70. Delbert had a good sense of humor and liked to tease his family and friends. He enjoyed the occasional trip to the casinos as well as the many relationships that he made over the years of working at the elevator. Delbert was preceded in death by his parents; an infant sister. Survivors include his wife, Patsy Anderson of Julesburg; son, Larry (Sue) Anderson of Omaha; daughter, Kathy (Larry) Neumiller of Talking Rock, GA; 5 grandchildren, Andi, Ashley, Jeff, Brian, LaTrisha; 4 great-grandchildren, Liliah, Braelyn, Travis, and Maylene Rose; along with many other relatives and friends. A memorial has been established in Delbert's memory for later designation. Condolences may be shared at prairiehillsjulesburg.com. Services will be on Thursday, February 1, 2018, at 2:00 p.m. at the Prairie Hills Funeral Home Chapel in Julesburg. Burial will be in the Ft. McPherson National Cemetery at Maxwell. Prairie Hills Funeral Home of Julesburg is in charge of arrangements.

The family of Delbert Dean Anderson created this Life Tributes page to make it easy to share your memories.

Send flowers to the Anderson family.