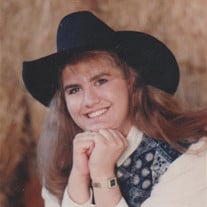 Deanna Blake, 43, of Julesburg, passed away on February 9, 2021, at the Sedgwick County Memorial Hospital in Julesburg. Deanna was born on October 6, 1977, in Alliance, NE to Hildy Christie. She knew at an early age that she wanted to be a nurse like her grandma, so she set her feet on the path to becoming a CNA while she was in the eleventh grade. She graduated from Garden County High School in Oshkosh, NE May 1996, subsequently went to work at both the Oshkosh and Lewellen Nursing Homes.  Deanna would spend time working in both Haxtun, CO, and Lincoln, NE, before life brought her to Julesburg, where she had intended to work as a CNA, before being diagnosed with Multiple Sclerosis at the age of 26. Instead of working at the Sedgwick County Memorial Nursing Home, she soon entered instead, as a resident for the last fifteen years. As her health deteriorated, Deanna became confined to a wheelchair. Her voice, which had garnered much praise in her youth, would wane, M.S. took its toll. Yet, as her nurses would wheel her down the halls, Deanna sang and joked. Despite her struggles and sufferings, she gained and maintained a perspective on life that was informed by faith in God. When life gave her many reasons to foster cynicism, Deanna and God were busy growing a mustard seed. She was baptized while in the nursing home, with her body no longer able to make the trip to church. Her arduous journey ended on Tuesday after having slowly laid down her youthful aspirations and even her health, only to pick up what God had promised. Having lost much of her sight in this life, plagued by strokes and paralysis, Deanna's faith has become sight, and she has received what God has in store for those that trust in Him. Deanna is survived by her mother, Hildy Christie of Julesburg, CO; sister, Katie Rose & Rick Rosas of Rushville, NE; honorary nephews, Thayne Tucker of Julesburg and Dakotah Tucker of Belfield, North Dakota; nephew, Justyce Rosas; niece, Harlie Rosas; great nephew, Kenai Tucker and grandmother, Wilma Blake of Julesburg, CO along with many other relatives and friends. Deanna is preceded in death by her grandparents, Elton & Mary Jane Christie; uncle, William Christie; aunt, Elizabeth Christie and grandfather, Amzie Blake Celebration of Life Services are April 17, 2021 at 10:30 am at the Julesburg Christian Church. A meal will follow, and everyone is welcome to attend. Cards may be sent to Hildy Christie at 115 Columbia Drive, Julesburg, CO 80737 or Katie Rose Rosas at P.O. Box 282, Rushville, NE 69360. Prairie Hills Funeral Home of Julesburg is in charge of arrangements.

Deanna Blake, 43, of Julesburg, passed away on February 9, 2021, at the Sedgwick County Memorial Hospital in Julesburg. Deanna was born on October 6, 1977, in Alliance, NE to Hildy Christie. She knew at an early age that she wanted to be a... View Obituary & Service Information

The family of Deanna Kay Blake created this Life Tributes page to make it easy to share your memories.

Send flowers to the Blake family.