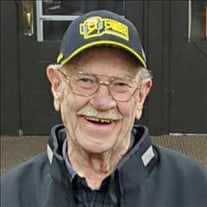 DARRELL GEORGE ZIMMERMAN, 86 of Julesburg, CO, passed away Wednesday, July 29, 2020, at Sterling Regional Medical Center. Darrell was born on August 1, 1933, on the family farm at Big Springs, Nebraska, to George C. and Lillian M. (Glenn) Zimmerman. He graduated from Big Springs High School in 1950. On March 2, 1957, Darrell married Suzanne "Polly" Lanckriet. The couple made their home in Big Springs for five years before moving to Julesburg. Their union was blessed with four daughters, Tammy, Dodie, Zanette, and Daphne. Darrell served as the Division Five Director for the National Hot Rod Association for thirty-five years. His territory for the NHRA spanned thirteen states and two provinces in Canada. He and Polly traveled countless times around the United States and Canada on a range of business for the association, from major track building projects to the promotion of the sport. Darrell's involvement in the local Platte Valley Custom Car Club was part of the impetus for the Julesburg Dragstrip, which is the oldest track in the NHRA. Darrell was very civically minded. He was involved in City Council and the Historical Society and even had a role in I-76 Interstate being built along Julesburg. He was also active in the Julesburg Gun Club and Ducks Unlimited. Darrell enjoyed farming, bowling, hunting, and trap shooting. He was a faithful fan of the Nebraska Cornhuskers and the Denver Broncos. He enjoyed spending time with "his girls" and their families. He was a big watcher of old westerns. Anyone who knew Zim, knew his very favorite color was red. As a young man, Darrell loved to build and work on cars. His heart was in racing, which ultimately put him on the unlikely path to Division Director for the NHRA. Even after his retirement in 1994, Darrell was a presence at the races, even working many of the national events. He made countless connections and meaningful friendships through his years working and advancing the sport. Darrell had an affable personality and represented himself well. He could typically be seen with a cigar in his mouth, which was classic Darrell, or "Zim," as he affectionately became known. Zim was a staple at the races, and his contribution to the sport, as part of the "old guard" of drag racing, was both impactful and foundational. Darrell was preceded in death by his parents; brothers, Stephen and Rosaline Zimmerman, and Larry and Marie Zimmerman; and sister, Barbara and Jerry Armbruster. Survivors include his wife, Polly Zimmerman of Julesburg; daughters, Tammy (Wade) Kallsen of Big Springs, NE, Dodie (Daniel) Koehler of Julesburg, Zanette (Timothy) Simon of Holly, and Daphne of Sterling; eight grandchildren, Erica and Brandon Kallsen; Jennifer & Danzer Koehler, Cameron (Elizabeth) & Chase Simon, Victor Zimmerman-Ferri & Falicia Zimmerman; two great-grandchildren, Talon Sweet and Quinn Kallsen; Michelle Zimmerman, Cindy Tritt, Doug Armbruster, and Vickie Nightingale; along with many other relatives and friends. In lieu of flowers, memorials are suggested to the Drag Racing Association of Women (DRAW), Julesburg Gun Club, Julesburg Dragstrip, or the Big Springs Alumni Association in Darrell's memory. Condolences may be shared at prairiehillsjulesburg.com, where a recording of the service will be posted. A private family memorial Mass will be held on Friday, August 7, 2020 with Fr. Mike O'Brien as Celebrant. Interment of Cremains will be in the Big Springs Cemetery in Big Springs, NE. Prairie Hills Funeral Home of Julesburg is in charge of arrangements.

The family of Darrell George Zimmerman created this Life Tributes page to make it easy to share your memories.

Send flowers to the Zimmerman family.