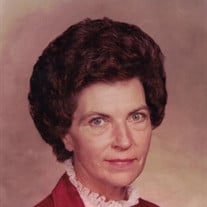 Darlene Faye (Thompson) Rose, 86, passed away on January 22, 2021, at Sidney Regional Extended Care in Sidney, NE. Darlene Rose was born on September 12, 1934 in Creighton, NE, to Edgar “Kelly” Thompson and Adelia (Gehrke)Thompson. The family moved back to Big Springs where Darlene attended country schools north of town, Town School in Big Springs, and Big Springs High School, graduating in May of 1951. She was baptized at the Methodist Church in Big Springs and later confirmed at Zion Lutheran Church in Big Springs, where she taught Bible School, Sunday School, and Confirmation classes. On March 16, 1952, Darlene was united in marriage to Lee Rose at the United Methodist Church in Big Springs. Lee & Darlene brought two children into the world, Douglas Lynn and Vicki Lee. While still in high school, Darlene completed Normal Training, qualifying her to teach kindergarten through 8th grade. Shortly after graduation, she was offered a teaching position at a country school in Lewellen. That August, at the age of 16, she began teaching students up through 8th grade. After marriage, she taught at country schools north of Big Springs, then in 1965 accepted a 5th grade teaching position at Big Springs Elementary School. During her tenure in the country schools she could often be found as an extra player in the recess ball games. In May of 1967, on the last day of the school year, she moved her entire classroom to the newly built school in town. One by one, she sent her students from the top floor down the fire escape, each with a box of books or supplies on their laps. Once at the bottom, they loaded their boxes into the back of a farm truck and trekked back up the stairs for another fully-packed slide down the fire escape. This memory was supplied by her daughter, a member of that 5th grade class. Throughout her career, Darlene also taught junior high and high school English, as well as junior high Social Studies. In addition, she spent many years leading both the Title and Gifted programs. Numerous years her summers were occupied with her own college classes, teaching summer school, and sometimes Migrant School. Darlene earned her Bachelor of Arts in Education at Kearney State College and a Master’s of Science in Education from Chadron State College. At Chadron, she was honored as a member of the Sigma Delta Nu society. The work ethic Darlene demonstrated throughout her life was developed at an early age. She was employed at the Coffee Cup Café by the age of 11, and never slowed down. While growing up, she also worked for several Big Springs families, washing and ironing clothes, cleaning houses, and doing dishes. After marriage, she added the responsibilities that came with farm life, although she admittedly challenged Lee to evening games of cribbage in attempts to get out of chores for the night. Darlene and Lee were avid card players and bowlers through the years. She was also a great spectator of trapshooting, following her son and husband to many events. When the kids had moved on in their lives she enjoyed attending auctions, taking woodworking classes, and refinishing furniture. Darlene inherited her family’s musical ability and used her beautiful singing voice in high school competitions, in local weddings and funerals, and as part of the Zion Lutheran Choir. Darlene loved teaching and took an active leadership role at the Educational Service Unit in Sidney. Through the years, she was also an active volunteer at the Ogallala Community Hospital, the Mansion on the Hill, and the Petrified Wood Gallery. She was awarded the South Platte Community Hero award for her work with the South Platte Coalition. In her free time, she enjoyed following the activities of her grandchildren. And as anyone with ears can attest, she never failed to share their successes with her friends and fellow educators. Darlene is survived by her children, Doug Rose (& wife Peggy) of Big Springs; Vicki Mitchell (& husband Mike) of Sidney, NE; brother Gary Thompson of Big Springs; sister Connie Shaw (& husband Randy) of Big Springs; grandchildren Jason Mitchell, Brittany Mitchell, Matthew Rose (& wife Rebekah), Joseph Rose (& wife Ophelia), Samuel Rose, Rebecca Kahrs (& husband Kelen); and great grandchildren Jackson Rose, Owen Rose, Thompson Rose, James Rose, Violet Kahrs and Monroe Kahrs. Darlene was preceded in death by her parents, her husband Lee Rose, brother-in-law Don Rose, and twin great grandchildren, Elizabeth Rose Kahrs and Emmitt Douglas Kahrs. Due to COVID concerns, a private family service at the Big Springs Cemetery will be held on Saturday, January 30th. Memorial donations can be made in Darlene's name to either the Zion Lutheran Church in Big Springs or the Darlene Rose Memorial Teaching Scholarship for local students pursuing a teaching degree. Prairie Hills Funeral Home of Julesburg is in charge of arrangements.

The family of Darlene Faye Rose created this Life Tributes page to make it easy to share your memories.

Send flowers to the Rose family.