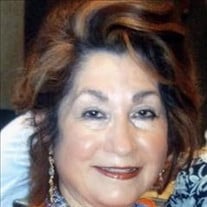 Connie Infante of Iliff passed away of natural causes on January 2, just four days shy of her 88th birthday in Sterling. Connie was born in Karnes City, Texas on January 6, 1934, to Alfonso and Mercedes Garcia. She was the fourth oldest in a family of 12 children and spent the majority of her childhood in south Texas. As the fourth oldest, Connie worked on the family farm before the family moved to Ogallala, NE when she was a teenager. She loved to sing, and she was known for singing at youth dances or whenever she had the opportunity. In her late teens, she worked at the TRW plant in McCook, NE, along with her older sisters, where she had her first taste of independence and excitement. Her love of singing was never far away. At family gatherings, a cousin or a relative often brought along a guitar, and she and her sisters would sing the lovely Spanish ballads that they grew up hearing in Texas. Connie was also a big fan of the old female country-western singers like Tammy Wynette and she could imitate their singing really well. Connie married Rafael Infante in 1954, with whom she had seven children. She and Ray moved from Sterling to Iliff in 1963, where they purchased their first property and eventually built their first home. Connie was devoted to her family and worked hard to raise her five sons and two daughters in Iliff. Connie was a fabulous cook. Her family, friends, and friends of friends were recipients of her gracious kindness and her home-cooked meals. She also owned and operated a cafe, La Fiesta, in Sidney, NE in 1983 to share her love of Mexican cooking. Connie enjoyed quilt making, various craft projects, and attending garage and estate sales. With a good eye for detail and art, she found many items that became special gifts or treasures in her own home. The beautiful quilts that she made for her family will always be cherished. Connie finished her school studies at NJC in the 70s and would practice with her children when they were going through school. She worked at Sterling Regional Medical Center for many years prior to working at the old Great Western factory in Sterling during harvest time for extra Christmas money for her large family. Connie is survived by her siblings, Dora Perez, Sara Hernandez, Marianne Harrison, Alfonso Garcia, Jr. and wife Bonnie, Marta Aguayo, Lupe Delgado, and Rosie Mondragon and husband Duke. Connie is also survived by her children: Mary Infante and husband, Phil Miller of Dallas, TX; Linda Somsen of Iliff; Arthur Infante of Lafayette, CO; Arnold Infante of Englewood, CO; Israel Infante of Sterling; Robert Infante of Lochbuie, CO. She will also be sadly missed by her ten grandchildren; Jennifer Somsen, Alyse and Kayla Infante, Erik, and Zachary Miller; Amy and Steven Somsen, Nalina Infante, Jackson Infante, and Sebastian Infante along with three great-grandchildren. She was preceded in death by her son, Christopher Infante, parents, Alfonso and Mercedes Garcia, and four of her 12 siblings. A memorial has been established in Connie's memory for Stroke.org or your favorite charity. Condolences may be shared at prairiehillsfuneralhome.com, where the service will be streamed live. A Celebration of Life service will be held on Saturday, April 9, 2022, at 11:00 am at the Julesburg Christian Church, with Pastor Alan Harris officiating. Inurnment will follow in the Hillside Cemetery in Julesburg. Prairie Hills Funeral Home of Julesburg is in charge of arrangements.

Connie Infante of Iliff passed away of natural causes on January 2, just four days shy of her 88th birthday in Sterling. Connie was born in Karnes City, Texas on January 6, 1934, to Alfonso and Mercedes Garcia. She was the fourth oldest in... View Obituary & Service Information

The family of Connie Infante created this Life Tributes page to make it easy to share your memories.

Connie Infante of Iliff passed away of natural causes on January...

Send flowers to the Infante family.