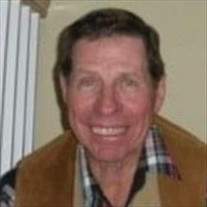 CHARLES EUGENE ROLFSON, 78 of Foxfield, CO, passed away April 10, 2020, at the Porter Hospice Residence in Centennial. Charles was born November 24, 1941, at Julesburg, Colorado, to Charles L. and Matilda (Henni) Rolfson. He graduated from Ovid High School with the class of 1960. Charles began his career in construction in Denver and Amarillo, TX. In 1968, Charles (Gene) was united in marriage to Yaeko (Yanch) Kinoshita at the Buddhist Temple in Denver. Charles worked as a site supervisor for many years on projects throughout the Denver metro area, from condos to apartment buildings, in a career in construction that spanned over fifty years. Charles had a great passion for horses, particularly quarter horses. As a young man, Gene enjoyed team roping. The quintessential cowboy, people would sometimes remark that he resembled the Marlboro Man. Gene was a man of his community and foundational in his neighborhood. When it snowed, Gene was the neighbor that would be scooping your walks before you knew it was him. He looked out for his neighbors any time they needed something, from helping with a home improvement project to just a simple visit. He volunteered at the local high school, working on their ball fields and even driving the homecoming floats. While he knew how to get things done, and was diligent in doing so, Gene also had a great gentleness about him, especially when it came to the needs of the people around him. Gene was preceded in death by his parents and a sister, Evelyn (DeeDee) Rolfson. Survivors include his wife, Yanch Rolfson of Foxfield; daughter, Karri (Mike) Miller of Parker and their children, Taylor and Charlie, all of Parker; sister, Frances Bressner of IL; along with many other relatives and friends. Private family services will be held at the Prairie Hills Funeral Home Chapel in Julesburg with Pastor Alan Harris officiating. Burial will be in the Sedgwick Cemetery. In lieu of flowers, memorials are suggested to Porter Hospice at The Johnson Center, 5020 E Arapahoe Rd, Littleton, CO 80122, in memory of Charles. Condolences may be shared at prairiehillsjulesburg.com where a recording of the service will be posted. Prairie Hills Funeral Home of Julesburg is in charge of arrangements.

The family of Charles Rolfson created this Life Tributes page to make it easy to share your memories.

Send flowers to the Rolfson family.