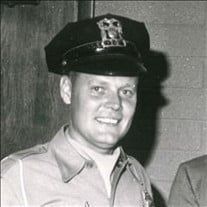 Charles M. "Mike" Maloney, 90 of Casa Grande, AZ, passed away Saturday, November 3, 2018 at his home. Mike was born on July 28, 1928, in Kansas City, Mo to Vincent E. and Opal (LeMaster) Maloney. He died in the loving care of Luis and Rosie Abad of Casa Grande, AZ. After the death of his mother in 1933, his father moved Mike and his two sisters and two brothers to Colorado Springs to be with Mike's granddad, T.D. Maloney. Mr. Malony owned a monument company, and in his teens, Mike worked alongside of him chiseling and engraving headstones. He left high school during his junior year, and in 1945, enlisted in the U.S. Navy where he spent two years in and around the South China Sea. He was discharged in 1947 and returned home to Colorado Springs to complete his high school education, graduating from Colorado Springs High School in 1948. Shortly thereafter, he enlisted in the U.S. Army and spent the next two years at Camp Carson. He was discharged in 1950, and he went to work for a small airline in Texas. In 1953 he returned to Colorado Springs and found his true calling with the Colorado Springs Police Dept (CSPD). His first assignment as a rookie was foot patrol and 24 years later retired as a Captain. He married and he fathered three sons. He found further enjoyment working for the Conoco Corporation and the American Numismatic Association. In 2001, he moved to Julesburg, CO to be near his sister and brother-in-law. Mike loved hunting prairie dogs with his friends and family, along with volunteering at the Hippodome Arts Centre. He dedicated himself to serving mass at St. Anthony's Catholic Church every Saturday night. Fortuitously for Mike, he also volunteered at the Colorado Welcome Center, because it was here that he met Lucille Kinnie. After a whirlwind romance, the two were married in 2001. He was preceded in death by his mother, Opal (LeMaster) Maloney, his father and step-mother, Vincent E. and Virginia (Romans) Maloney; wives, Wilma, Jeanne, Mary Jane and Lucille; brother and sister-law, Dan E. and Ruth Maloney and sister, Patricia Dunaway. He is survived by his son, Keith Maloney and Jo Ann Bedia; granddaughter, Mackensie and husband and four great-grandchildren; sons, Brian Maloney and Tim Maloney; brother and sister-law, Vincent E. and Romelle Maloney; sisters, Marcella Warila and Dorothy Woltemath as well as several nephews, nieces and cousins. Mike was known for his story-telling, and particularly liked recounting his time in the Navy and the CSPD. The family is especially grateful to the CSPD for sending an Honor Guard for his funeral and burial. He loved being a cop. His family and friends will miss the stories and him a great deal. A memorial has been established in his memory for later designation. Condolences can be shared at prairiehillsjulesburg.com. Mass of Christian Burial will be held Tuesday, November 13, 2018 at 11:00am at St. Anthony of Padua Catholic Church in Julesburg with Father Michael O'Brien as Celebrant. Burial will be in the Hillside Cemetery at Julesburg. Visitation will be Monday, November 12th from 2:00pm to 4:00pm at Prairie Hills Funeral Home in Julesburg, with a Rosary at 7:00pm at the funeral home. Prairie Hills Funeral Home in Julesburg is in charge of arrangements.

Charles M. "Mike" Maloney, 90 of Casa Grande, AZ, passed away Saturday, November 3, 2018 at his home. Mike was born on July 28, 1928, in Kansas City, Mo to Vincent E. and Opal (LeMaster) Maloney. He died in the loving care of Luis and Rosie... View Obituary & Service Information

The family of Charles "Mike" Michael Maloney created this Life Tributes page to make it easy to share your memories.

Send flowers to the Maloney family.