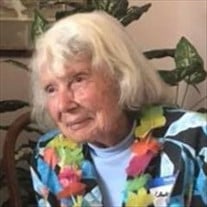 Celeste (Cavin) Parker, passed away at 92, on March 22, 2021. Celeste was born June 23, 1928 and grew up in the Arizona sun where her grandfather had been mayor of Phoenix. She loved to travel, and learn about different areas and various people, including the Navajo, Hopi, and other Native Americans of Arizona. She traveled with her parents George Cavin and Doris Christy Cavin and older brothers, William Christy Cavin and George Cavin on numerous car trips around the United States. After graduating high school she ventured out to experience colder climates at Colorado A&M College, now Colorado State University, where she became a Delta Zeta and received her Bachelor of Science in Horticulture in June of 1950. She met her husband, Dee Parker, at a sorority/fraternity dance and they married in June of 1950. They lived in Fort Collins until Dee finished vet school in 1952. Soon after, Dee entered the Air Force and they were sent to Gunter Air Force Base in Montgomery, Alabama. From there Dee was stationed at Johnson Air Force base in Irumagawa, Japan. Celeste later followed Dee to Japan with two young children in tow (Don and Doug) and had a third (Dale) while living on the base. After having completed their tour with the Air Force, Celeste and Dee moved to Sedgwick, CO, to take over the family ranch that had been run by Dee's parents, Louise and D.H. Parker, Sr, and to start their veterinary practice out of the back end of a station wagon and the kitchen of their house. Celeste was a lover of nature and animals. The house was always full of animals. Along with the cattle, horses, cats, dogs, birds, guinea pigs, hamsters, fish, even a chinchilla found a home on the ranch. The surgery on dogs, cats and other animals including pet skunks and at least one monkey took place in the evening after a full day of work outside on cattle, horses, sheep, pigs, and an occasional donkey or mule. The house was often open till late at night and clients were entertained with hot coffee and conversation till the wee hours when their animals were ready to go home. Celeste always lent a hand or a shoulder when she saw it was needed, including giving food and a place to stay to strangers. During the summers, there were always extra children, cousins and friends, spending time on the ranch, experiencing the ranch/vet life, working and learning to water ski on Jumbo Reservoir. They also took their children on long car and camper trips to Alaska, Montreal and New York. Later, Doc and Celeste traveled extensively visiting South America, Australia, New Zealand and South Africa. They threw a huge branding party every May where Celeste pushed up calves, kept records and cooked for the whole crew. They continued serving their rural agricultural community for almost 50 years. Celeste was a wonderful mom and is survived by her three children and their spouses, Don and Mary Parker of Golden, CO, Doug Parker and Laura Eckert of Napa, CA and Dale Parker and Rich Hartman of Sedgwick, CO. Five grandchildren, Jake Hartman of Golden, CO, Charlie Hartman of Holyoke, CO, Emily Hartman of Fort Collins, CO, Claire Till and husband Ralph of Arcata, CA, and Tom Parker of Napa, CA. In lieu of flowers, please send donations to any local charity or charity of your choosing. A private family graveside service will be held at a later date. Interment of Cremains will be in the Julesburg Hillside Cemetery. Prairie Hills Funeral Home of Julesburg is assisting the Parker family.

Celeste (Cavin) Parker, passed away at 92, on March 22, 2021. Celeste was born June 23, 1928 and grew up in the Arizona sun where her grandfather had been mayor of Phoenix. She loved to travel, and learn about different areas and various people,... View Obituary & Service Information

The family of Celeste Parker created this Life Tributes page to make it easy to share your memories.

Send flowers to the Parker family.