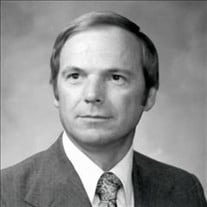 CARL "BUD" MELINE, 81 of Julesburg, Colorado, died peacefully at home Thursday, March 7, 2019 surrounded by his children. Carl Wiley Meline was born November 21, 1937 in Julesburg, Colorado to Carl Vincent Meline and Alice (Stone) Meline. He attended Julesburg schools and graduated in 1956. He graduated from CSU in Fort Collins in 1960 with degrees in Animal Nutrition and Husbandry, as well as Biochemistry. He was a member of Sigma Phi Epsilon fraternity. After college, he joined the Navy, serving as an officer for 4 years aboard the USS Tulare throughout the Pacific, then the Tonkin Bay of Vietnam. He was the ship's Gunnery Officer, and later Boat Group Commander in charge of landing craft. He was also qualified to command at sea. He married Konnie (Linton) Reynolds in 1966. Together they had 3 children, Melinda, Marc and Michael. They later divorced. He primarily worked in real estate and farming. Besides Julesburg, he lived several years in Fort Collins and Rifle, Colorado, and for a short time in New Orleans. Carl enjoyed playing games and cards, watching football, antiquing, tinkering in his shop, and visits from his grandkids. He loved getting coffee and donuts each morning, and meeting friends for laughs at the end of the day. Carl is survived by his 3 children, Melinda (Brett) Boddicker of Windsor CO, Marc Meline of Julesburg CO, and Michael (Shelley) Meline of China Spring TX, sister Jamie Frey of Norfolk NE, 9 grandchildren, and 3 great grandchildren. Carl was preceded in death by his mother and father, sister and brother-in-law Marilyn and Bill Krieger, and brother-in-law Tom Frey. A Celebration of Life will be held at 1:00pm Saturday, March 16, 2019 at Prairie Hills Funeral Home in Julesburg. In honor of Carl, the theme for his Celebration is "WEAR DENIM." Interment of cremains will be at the Julesburg Hillside Cemetery. Memorials made to the family will be used to support the Colorado Post-Polio Organization (CPPO) and Post-Polio Syndrome Research. Memorial checks written directly in Carl's honor can be made out to "Easter Seals" with "For CPPO" noted in the memo section. Condolences can be shared at prairiehillsjulesburg.com. Prairie Hills Funeral Home of Julesburg, CO is in charge of arrangements.

The family of Carl "Bud" Meline created this Life Tributes page to make it easy to share your memories.

Send flowers to the Meline family.