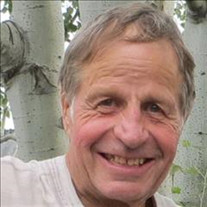 Bohn D. Dunbar of Haxtun, CO, passed away Friday, October 22, 2021, at his home. Bohn was born March 13, 1947, at Sterling, Colorado, to Boyd Earl and Lydia Annabel (Pierce) Dunbar. He graduated from Haxtun High School and attended Northeastern Junior College. He received his Associated Degree, the University of Northern Colorado, his Bachelors's Degree, and Colorado State, where he obtained his Ph.D. in Agronomy. On June 8, 1982, Bohn married Teresa Gilbertson, and the couple made their home in Haxtun. Bohn taught school in Akron, Colorado, for three years and worked for the USDA as a research scientist for many years until he became ill from a vaccine. Bohn enjoyed rocks and minerals from a very young age. He was an icon in the fine jewelry, gem, and mineral business and was loved by all. Bohn loved to travel and had visited numerous countries, making many foreign friends. He made people and friends laugh with his various stories. Bohn liked music and played drums in bands from a young age. He also liked to build things, had many collections, and was always involved in something. He enjoyed computer work and always kept up on current events. Bohn loved cats and had many over the years. Bohn was preceded in death by his father, Boyd, and John, an infant brother. Survivors include his wife, Teri Gilbertson of Haxtun; mother, Lydia Dunbar of Haxtun; sister, Bonnie Dunbar of Kenya, Africa; brother, Charles Dunbar of Haxtun; along with numerous other relatives and friends. A memorial has been established in Bohn's memory for later designation. Condolences may be shared at prairiehillsjulesburg.com. No services are planned at this time. Prairie Hills Funeral Home of Julesburg is assisting the Dunbar family.

The family of Bohn Douglas Dunbar created this Life Tributes page to make it easy to share your memories.

Send flowers to the Dunbar family.