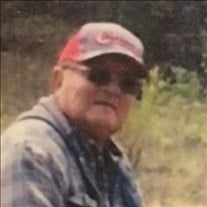 BILL R. ANDERSEN, 77 of Ovid, passed away Friday, October 19, 2018 at Rio Grande Hospital in Del Norte, CO. Bill was born August 11, 1941 in Julesburg, CO to Stanley "Bud" and Doris (Fredrick) Andersen. He graduated from Ovid High School. On June 11, 1961, Bill married Clara Kain at Haxtun, CO. The couple made their home in Ovid for several years before moving to Nebraska. In 1981, they returned to Ovid where Bill worked at Central Sand and Gravel as a supervisor for 16 years. After retirement, he decided to farm the land they owned. Bill was a farmer at heart, a simple man. He loved to compete in tractor pulls in the area. He enjoyed playing 5 point pitch and hunting pigs. He was a fan of Bronco football. Bill was preceded in death by his parents and a brother Byron Andersen. Survivors include his wife, Clara of Ovid, CO; sons Tom (Julie) Andersen; Terry (LaVonne) Andersen both of Holyoke, CO; Tim (Gina) Andersen of Gillette, WY; Ted (Arlene) Andersen of Alamosa, CO; 7 grandchildren, Julie Rae, Billy, Dustin, Brittany, Jentry, Tiffany, and Brian; 10 great-grandchildren and his Aunt Neva Wilson of Denver, CO. In lieu of flowers, memorials are suggested to the Ovid Food Pantry, Rio Grande Hospital in Del Norte, or the donor's choice in Bill's memory. Condolences can be shared at prairiehillsjulesburg.com. Funeral Services will be Wednesday, October 24, 2018 at 10:30am at Prairie Hills Funeral Home Chapel in Julesburg with Pastor Kristie Firme officiating. Burial will be in the Ovid Cemetery. Prairie Hills Funeral Home of Julesburg is in charge of arrangements.

The family of Bill R. Andersen created this Life Tributes page to make it easy to share your memories.

Send flowers to the Andersen family.