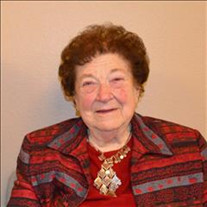 Bernice Rosa Johanna Schiermeyer Schuler was born March 19, 1924 in a sod house 9 miles east and 1.5 miles south of Holyoke, CO. She died from failing health on May 11, 2020 at the age of 96 in Julesburg, CO after a long fulfilling life. Bernice attended the Evergreen School in the country through the 4th grade, and then moved with her parents into Holyoke to start in the 5th grade in 1935. She finished school in Holyoke and graduated from Holyoke High School in 1943. Two weeks after graduating from high school she started to work for Ray E. Crosby in the Phillips County Treasurers Office. She worked for almost 2 years. During this time she met and married H. Arthur Schuler, Jr. on September 23, 1944. Shortly after their marriage, Art was inducted into the Navy and was stationed in Providence, RI and then in Philadelphia. PA. Bernice joined him there for a time but they eventually returned to the family farming operation south of Julesburg, CO. During their time on the farm, three children were born: Sharon Kae on February 9, 1946; Jack Arthur on September 9, 1948; and Linda Rae on June 11, 1950. Along with raising the kids, watching over numerous farm-hands and preparing a multitude of banquets, Bernice managed the farm-home until 1961 when the family farm home burned. The family then moved to Julesburg and built a home that she, up until recently, still lived in. Bernice became bored after moving to town and took a part-time job with Sterling Savings and Loan. Twenty years later and after a name change to World Savings and Loan and becoming the manager of the branch she decided to retire. In the mid 1980's, Art became ill and passed away on June 27, 1985 after almost 41 years of marriage. Bernice continued to make her home in Julesburg for the next 35 years and still enjoyed it. Bernice was a past member of Eastern Star, Member of the Garden Club, United Methodist Church, Jolly Neighbor Club, and enjoyed her numerous hobbies and crafts and raising flowers. The last few months were hard and she hated that she would not be able to go back to her home for the summer of 2020. She loved her family and is survived by 3 children, 5 grand children, 10 great-grandchildren, 2 great-great grandchildren, and 2 nieces and 1 nephew. Plus a host of great friends, wonderful families and great neighbors. Survivors include daughters; Sharon Schuler and Linda Dolezal and husband Craig, Son, Jack Schuler and wife Kathi. Grand Children: Lisa Von Hoff and husband Jason, Allison Harrell and husband Ben, Chris Dolezal, JR Schuler and wife Amanda, Carleton Dolezal and wife Natalie. Great Grand Children: Joe, Nick, and Sam Frasca, Kelsie Sillzell, MacKinzie and Nevoeh Harrell, Ella and Jace Dolezal, Charlie Dolezal, Macy Schuler. Great-Great Grand Children: Madelyn and William Frasca. Bernice was preceded in death by: her parents; William and Lydia Schiermeyer, brother; Willmore Schiermeyer, husband; Art Schuler, Jr., great-granddaughter; Kaylie Rose Sillzell, and brother and sister-in law; Milton and Maybel Schuler. Due to the Covid-19 pandemic limitations a family funeral and graveside service was held on Saturday May 16, 2020 in Julesburg, CO. If you wish to donate to a memorial on Bernice's behalf, please send your donations to the Julesburg Swimming Pool Project or the Julesburg United Methodist Church. Prairie Hills Funeral Home of Julesburg is in charge of arrangements

Bernice Rosa Johanna Schiermeyer Schuler was born March 19, 1924 in a sod house 9 miles east and 1.5 miles south of Holyoke, CO. She died from failing health on May 11, 2020 at the age of 96 in Julesburg, CO after a long fulfilling life. Bernice... View Obituary & Service Information

The family of Bernice Schuler created this Life Tributes page to make it easy to share your memories.

Send flowers to the Schuler family.