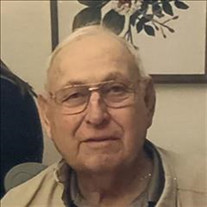 Bernard "Bernie" Sorensen, 81 of Big Springs, NE, passed away Thursday, February 25, 2021 in Mesa, AZ. Bernie was born at the farmhouse north of Big Springs, NE on December 9, 1939 to his parents Ivan and Gladys Sorensen. He was the youngest of three siblings, Vivian Marie and Donald Melvin Sorensen. Bernie attended rural school, playing a piano solo at 8th graduation. He graduated from Big Springs High School with the Class of 1957. He attended University in Lincoln, as well as worked for Able Construction Company. Bernie attended night classes while employed at Able Construction Co. Bernie moved to Denver and took a job with Montgomery Ward in retail sales while attending night classes at University of Colorado. Bernie and Cathy McClung were married Sept. 3, 1961 at the Methodist Church in Ogallala. He began farming north of Big Springs at the Otto Mauser farm, where they raised their two children, Karma Dee and Kyle William. Bernie served 15 years on the Big Springs school board. He acquired his private pilot license in 1975, and his Real Estate license in 1978. Bernie was in a partnership with Larry Cummings with Cumming Realty Inc. for 30 years. He enjoyed selling farm and ranch land and meeting new people from different areas. He was a partner with Harold McClung in the 70's and 80's in the trucking business. Bernie developed land in the Broadwater area, flying his help to and from work. His hobbies included golf, hunting, and fishing as well as working in the shop with Kyle. He was a life member of the Elks and is a member of the United Methodist Church of Big Springs. In 1999, Bernie and Cathy began enjoying the winter months at their home in Mesa, AZ. He was a member of the Fountain of the Sun Country Club where he played golf four days a week, meeting many new friends from many different states as well as Canada. He always went by the saying, "everything has a place and everything is in its place." Survivors include his wife Cathyrn of 59 years, his daughter, Karma Dee and husband Bob from Colorado Springs, CO and son Kyle William and his wife Tami of Big Springs, NE. Grandsons, Andrew Olson and wife Courtney and their two daughters Audrey and Alayna of Colorado Springs, and Tyler Olson and wife Kayla and son Easton of Cheyenne, WY. A brother Don Sorensen and wife Anna of San Antonio, TX. Many nieces, nephews, family and friends. He was preceded in death by an infant son, Douglas Allen; parents, Ivan and Gladys (Burnham); as well as a sister, Marie Palser Roome. A memorial has been established in his memory for later designation. Condolences can be shared at prairiehillsjulesburg.com. Memorial services will be Friday, April 16, 2021 at 2:00pm at Big Springs Assembly of God in Big Springs, NE. Interment of cremains will be in the Big Springs Cemetery. Prairie Hills Funeral Home of Julesburg is assisting the Sorensen Family.

Bernard "Bernie" Sorensen, 81 of Big Springs, NE, passed away Thursday, February 25, 2021 in Mesa, AZ. Bernie was born at the farmhouse north of Big Springs, NE on December 9, 1939 to his parents Ivan and Gladys Sorensen. He was the youngest... View Obituary & Service Information

The family of Bernard I Sorensen created this Life Tributes page to make it easy to share your memories.

Send flowers to the Sorensen family.