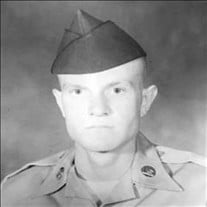 BERNARD ANDREW LANCKRIET, 68 of Julesburg, entered into eternal rest on Monday, January 28, 2019 at Sedgwick County Memorial Hospital. Born May 19, 1950 in Julesburg, he was the second son of Francis "Jiggs" and Freda (Ash) Lanckriet. Bernard attended school in Julesburg, graduating in 1968, then from Northeastern Junior College. After a few years of a varying career paths, he enlisted with the Army National Guard for four years, he later joined the US Army, retiring in December 1996. His assignments included service in Oklahoma, Germany, Hawaii, Korea, Maine and Washington State. On September 21,1973 he married Marcia Caldwell, and adopted her daughter Jodie. Bernard returned to Julesburg in the early 2000's. Throughout his life, he had a passion for cars and drag racing, spending a lot of his time at Julesburg Dragstrip. He also loved fishing and was a very talented artist. Bernard was preceded in death by his father Francis, two infant brothers, and two infant sisters and brother-in-law Dee Peyton. He leaves behind his mother, Freda Lanckriet of Julesburg, ex-wife Marcia Lanckriet, daughter Jodie Ann (Greg) Mansuy, and granddaughter Amanda Lee Mansuy of Washington, brothers Larry (Connie) Lanckriet of Weldona, Jim (Vickie) Lanckriet of Julesburg, and sisters Carol (Doug) Schiel of Julesburg, Barb Peyton of Ovid, and Sharon (Kenny) Dillie of Sterling along with numerous nieces and nephews. A memorial service will be held Friday, February 1, 2019 at Prairie Hills Funeral Home in Julesburg at 10:30 a.m., inurnment will follow at Hillside Cemetery. Pastor Alan Harris is officiating. In lieu of flowers, the family suggests memorial donations to be made to Adopt-a-Dog Animal Rescue of Chappell, NE. Online donations are accepted via their Facebook page at Adopt-a-Dog Animal Rescue, or may be mailed direct to 16724 Highway 30, Chappell, NE 69129. Prairie Hills Funeral Home has been entrusted with arrangements.

The family of Bernard Andrew Lanckriet created this Life Tributes page to make it easy to share your memories.

Send flowers to the Lanckriet family.