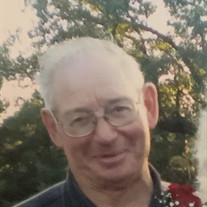 Arvin "Shorty" Dean Pigman was born in Glenwood, MN, on September 21st, 1947, and passed away on January 10th, surrounded by his family. Shorty's early years were spent growing up in Raymond, SD; then, in 1958, his family moved to Wisconsin. He graduated from Fredric WI HS 1966 and then enlisted in the Army in the fall, where he served three years with two terms in Viet Nam. He was a lifelong truck driver, enjoyed welding; he taught his daughters the value of a clean truck, a hard day's work, and a love for family. Shorty married Marie Bryant on May 2nd, 2015. They both love the open road and drove their semi-truck for five years, up until the day of his passing. Shorty spent most weekends maintaining their truck and farm, which brought him great joy. Shorty and Marie spent every day together. Shorty is survived by his wife Marie of Julesburg, CO, daughters Sherry Pigman of Ashburn, VA, Susan Flaming of Alexandria, VA, Sandy (Ron and granddaughter, Faith) Wilson of Bowling Green, KY, Marie's children: Stanley (grandson, Tylar) Bryant of Ovid, Co, Barbara (Ivan and grandchildren, Will, Christopher, & Megan) Gitchel of Riverton, Wy. Siblings, Lyle (Carolyn) Pigman of Lebanon, OR, Verlyn (Geraldine) Pigman of Dallas, OR, Rhonda (Gary) Erickson of Webster, WI, Randy (Tangy) Pigman of Cookville, TN, Boyd (Tressa Cain) Pigman of Ridgeland, WI, and multiple nieces and nephews. He is preceded in death by his parents, Ronald and Leota Pigman, siblings, Gayle Pigman, Dennis (Helen) Pigman, Lynette (Jim) Schroeder, and LaVonne Wicklund. The family would like to express their sincere thanks to the staff at Northern Colorado Medical Center of Greeley, CO. The staff took phenomenal care of Shorty during the end of life. A memorial has been established in Shorty's memory for later designation by his family. Condolences may be shared at prairiehillsjulesburg.com, where a recording of the services will be posted. Viewing will be held on January 13th, from 5 p.m. until 8 p.m. at the Prairie Hills Funeral Home in Julesburg. Services will be on January 14th at 1 p.m. at the Prairie Hills Funeral Home chapel in Julesburg with Pastor Kerry Johnson officiating. Shorty will be laid to rest in the Hillside Cemetery, Julesburg, CO. Prairie Hills Funeral Home of Julesburg is in charge of arrangements.

Arvin "Shorty" Dean Pigman was born in Glenwood, MN, on September 21st, 1947, and passed away on January 10th, surrounded by his family. Shorty's early years were spent growing up in Raymond, SD; then, in 1958, his family moved to Wisconsin.... View Obituary & Service Information

The family of Shorty Pigman created this Life Tributes page to make it easy to share your memories.

Send flowers to the Pigman family.