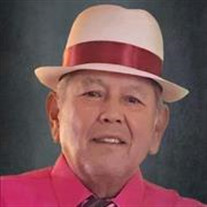 ALBERT RAMOS SR, 75, of Julesburg, CO, passed away November 5, 2020 in Ogallala, NE. He was born October 7, 1945 to Salvador Joe Arroyo and Virginia Sandoval. Albert served in Vietnam in the U.S. Army as a paratrooper in the 101st airborne division "Screaming Eagles." While in service, Albert married Julia Reyna. Their union was blessed with two children, Carmen and Albert Jr. Later on, he would be blessed with another child, Angela, with Guadalupe Iturrios. Albert started working on the Union Pacific Railroad in 1972. He was then remarried in 1974 to Blanca E. Guzman. Their union was blessed with Natalie, Tonya, and Yvette, and they later adopted Jazmin. Albert took great pride in helping many friends and family members secure positions on the railroad. His career spanned over 33 years, and in that time, he was relocated frequently for promotions, from Julesburg, CO to San Antonio, TX. During his time on the railroad he became the first Hispanic officer (General Road Master) and consistently advocated for minorities throughout his tenure. Albert retired in 2006; he then returned to his hometown of Julesburg, CO. Albert's favorite hobby was fishing, which he enjoyed doing with his family. He also enjoyed music and dancing. He was a hard worker and often helped his family and friends in any way he could. Albert had a great zest for life, and a passion for camaraderie that made him such a joy to be around. Albert was preceded in death by his parents Joe and Virginia and siblings; Gloria, Irene, Victor, Mike and Angie. His wife Blanca passed away in December 2014. Survivors include his children; Carmen Sawasaki (Steve) of Morgan Hill, CA, Albert Ramos Jr. (Stephanie) of San Jose, CA, Angela Smith (Alberto) of Ogallala, NE, Natalie Crowley (Chris) of Sterling, CO, Tonya Ramos of Julesburg, CO, Yvette Velasquez (Sergio) of Aurora, CO, and Jazmin Ramos of Sterling, CO. Survivors also include his grandchildren; Melissa Godinez, Sarah Sawasaki, Nicole Sawasaki, Sebastian (Molly) Smith, Nathaniel Smith, Savión Smith, Ciara Crowley, and Aaron Crowley, great-grandchildren; Andrew Montablo, Rory Smith, Olivia and Sophia Collins and siblings; Daniel, Madeline, Helen, Joe, Sally, Ilene, Meliton, and Rita as well as many nieces and nephews. Memorial contributions may be made to the American Cancer Society in Albert's memory. Prairie Hills Funeral Home of Julesburg is in charge of all arrangements. Condolences may be shared at prairiehillsjulesburg.com. A Celebration of Life “open house” will be held on Thursday, November 19, 2020, at the United Methodist Church, 520 Maple St in Julesburg, from 10 a.m. until 12 p.m. Interment will be at the Julesburg Hillside Cemetery from 12:30 p.m. until 1:30 p.m. FACE MASKS ARE REQUIRED FOR ALL INDOOR AND OUTDOOR SERVICES. Pastor Kerry Johnson will be officiating.

ALBERT RAMOS SR, 75, of Julesburg, CO, passed away November 5, 2020 in Ogallala, NE. He was born October 7, 1945 to Salvador Joe Arroyo and Virginia Sandoval. Albert served in Vietnam in the U.S. Army as a paratrooper in the 101st airborne... View Obituary & Service Information

The family of Albert Ramos created this Life Tributes page to make it easy to share your memories.

Send flowers to the Ramos family.